What is the structure of the butterfly's shining wings? 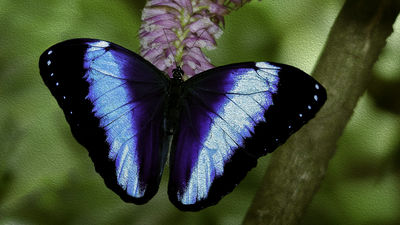 There are butterflies with unique colors all over the world, such as butterflies with vivid wings as if they are emitting light, and butterflies whose wings change color depending on the viewing angle. The phenomenon in which butterfly wings appear to shine is called `` iridescence '', but I studied mathematical physics at the University of California, Riverside, asking why the iris gloss was born. Explained by John Baez.

A new fact that the material contained in butterfly wings has a 3D graphene structure was discovered in June 2015 by a study by MIT mathematician Herman Weil. Graphene is a sheet-like substance in which carbon atoms are strongly bonded with a thickness of one atom, and has excellent thermal conductivity and electrical conductivity. The following image is a model showing the molecular structure of graphene. This substance is a polysaccharide polymer called chitin , which is hard and strong enough to be the main component of crab shells. Recent studies have revealed that the butterfly with bright wings has a gyroid shape. The shape of gyroids is slightly different, so when sunlight hits the wings, the light refracts through the inside of the wings in a complex way and the wings appear to shine. 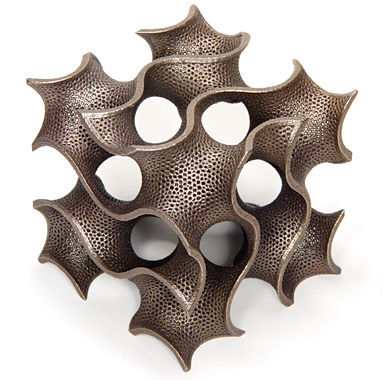 If you actually look at the butterfly wing under a microscope, you can see that the layers of the gyroid structure overlap in various directions. The photo below shows a wing of green swallows magnified with a microscope. Green swallow is a butterfly with green wings as its name suggests. by David A. Hofmann

In addition to butterfly wings, it has been known that it has a gyroidal structure when the oil mixed with water is united on the surface of the water.