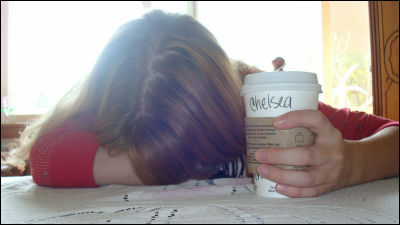 Coffee is a drink loved all over the world and tends to focus on the good parts of coffee, but according to the results of a study by Mayo Clinic Proceedings , a journal of the medical institution Mayo Clinic, which is highly acclaimed in Japan and abroad , Those who drink more than 28 cups of coffee per week have a significantly lower survival rate than those who drink less.

Study Says Excess Coffee May Be Linked To Early Death.Should We Believe It?-- Forbes
http://www.forbes.com/sites/alicegwalton/2013/08/16/study-says-excess-coffee-is-linked-to-early-death-should-we-believe-it/

The study tracked about 44,000 men and women between the ages of 20 and 90 between 1971 and 2003, declining what caused them to die, coffee consumption and diet, I collected information about exercise, smoking, weight, etc. Based on the information for 17 years, which is the median of the period from 1971 to 2003, the mortality rate due to coffee is shown in the graph below using the Kaplan-Meier method. The survival rate and the horizontal axis represent the number of years passed.

This is a graph showing how many people died during the survey period, divided into 6 levels according to consumption, such as 'people who do not drink coffee' and 'people who drink 1 to 7 coffees a week'. For women, those who drank more than 28 cups of coffee a week were twice as likely to die as others. Here is a graph showing the survival rate of men by coffee consumption, and it turns out that for men, those who drink more than 28 cups of coffee a week have a 56% higher mortality rate than other people. 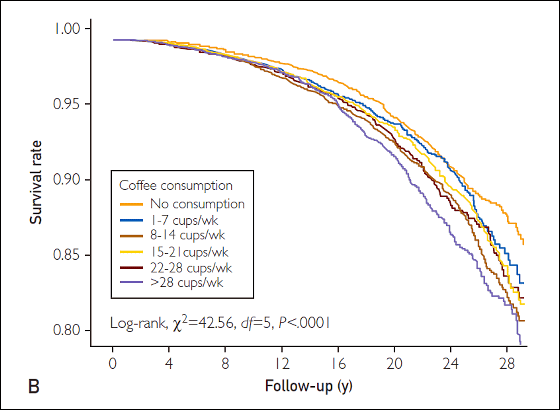 However, it is not yet known what mechanism links coffee and death, and there are many unclear points such as whether reducing caffeine will affect the result. That. Also, I am worried that the relationship between coffee and death can only be seen in people under the age of 55 . 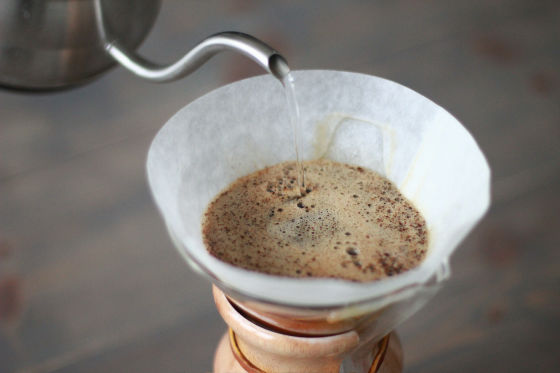 This study revealed a strong link between coffee and mortality, but high coffee consumption is not a direct cause of death, so drink four or more cups of coffee daily. It is better for people who say that they don't refrain from ingesting, but to check whether there is a cause of unhealthy lifestyle and living environment.