Life-Sized Evangelion-01 to be in Amusement Park in July It is still fresh in our mind that life-sized Gundam statue in Odaiba, Tokyo gathered more than 4 million audiences from all over Japan. And there seems to be another super robot-themed scenic site to come.

In July, we will be able to see life-sized Evangelion in Fujikyu Highland, an amusement park at the foot of Mt. Fuji. The boom still seems to be going.

According to the press release by Fuji Kyuko Co, Ltd., the operating company of the park, the opening date for life-sized Evangelion Unit-01 exhibition will be July 23th(Fri.).

Regretfully there will be only a bust of Unit-01, not the whole body. But they are to present this at the stage reproducing "7th cage", an underground hanger where protagonist Shinji Ikari and Evangelion Unit-01 first met.

Also life-sized Unit-01 cockpit and a life-sized statue of Kaworu Nagisa are to be exhibited alongside. Of course there will be museums, photo spots and souvenir shops.

They now have the official site for the project and showing videos and documents about the exhibition. 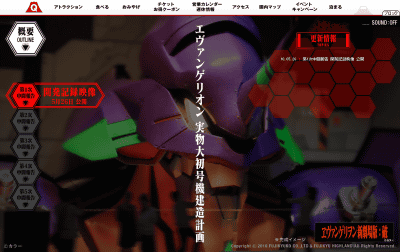 Asuka the Pilot of Unit-04? Bizarre Question in the Listening Section of JLPT - GIGAZINE