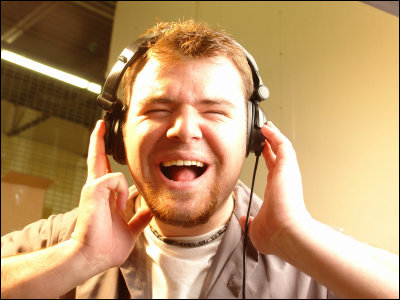 "Nodo Jiman" is an amateur karaoke competition TV program by NHK which has been gaining nation wide popularity since its start as a radio program in 1946. Every weekend, the program broadcasts the massive competition including all-time standards to the latest pop music.

And for this time, NHK is going to have an "anime song only" karaoke competition, accepting application for qualifying trial from all over Japan. The final will be broadcasted on TV and has some gorgeous guests like Ichirou "Aniki" Mizuki, Masako Nozawa of Dragon Ball, Toru Furuya of Saint Seiya, anime composer Kohei Tanaka of Sakura Taisen series and so on.

According to the page, now they are accepting applications for qualifying-trial held at NHK Osaka hall on May 3rd (Sun). The application must be sent by Apr. 14th by reply-paid post card. You may participate either solo or in a group.

The 15 winners of the trial can participate in the final on the next day May 4th (Mon). In the final, Ichiro Mizuki and May'n appears as the guest singer. The judges are chosen from anime big names such as writer Toshio Okada, composer Kohei Tanaka, AKB48's choreographer Mayumi Natu, Masako Nozawa and Toru Furuya.

There are some songs which needs many singers like "1000% SPARKING" or "Happy Material" from "Negima!: Magister Negi Magi". It will be great if there's a group to sing these. We are so exicited to see the program.